Hanif’s worst crisis came just after his eighth birthday and landed him in the hospital on a ventilator for acute chest syndrome. The attack grew so severe that he had to be transferred by ambulance to the Intensive Care Unit of Maria Fareri Children’s Hospital. Hanif’s condition continued to worsen and doctors had no choice but to place him in an induced coma after both of his lungs collapsed. He was induced for six weeks and doctors were uncertain if he would make it.  His parents were in tremendous turmoil with limited options that could help their son.  It was during this time that a physician from the Division of Pediatric Hematology Oncology and Bone Marrow Transplant came to visit Khuraira and Patrice to let them know that a bone marrow transplant from a mother or father would be an option for Hanif if he survived this crisis.  Luckily, Hanif pulled through but his functioning was impaired.

Upon his recovery, Khuraira and Patrice considered bone marrow transplantation as the only way to save Hanif from another life threatening crisis.  Unfortunately, he had no tissue matching sibling donors. After meeting with Dr. Cairo and other physicians in the division, his parents were worried about associated risks, but decided that given Hanif’s pattern of crisis, a transplant would give him a better chance for life. Hanif underwent a familial haploidentical stem cell transplant from his mother as the donor on the research protocol.  Today, Khuraira and Patrice are confident they made the right decision for their son. Currently, Hanif is one year out from his transplant and is sickle cell disease free and without pain, and has resumed a normal life. He wants to a write a book to share his experience with other kids and cannot wait to be old enough to become Dr. Cairo’s assistant! His ultimate goal is to be a doctor so he can help find a cure for Sickle Cell Disease so that no child has to go through the pain he endured.
Prior to this trial, transplant was not an option as Kyle did not have a related match. When the option arose, Kyle says he gained strength from his mother and knowing that she would be by his side.  Like his mom, he thought about the good that would come from the transplant— a life without pain.

Since the transplant, Kyle has not experienced a crisis or any pain associated with SCD.  He no longer misses days of school or his friends because of SCD.  When he is older, he would like to be “Dr. Howell” so that he can help children suffering from SCD and sickness. Kyle shared with us: “I hate seeing people in pain and want to help.”  He hopes that this trial will help other children living with SCD just as it did for him. 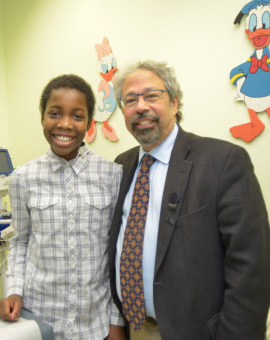 Photo: Patient Althea with Dr. Cairo
Althea's Story: Today, you can speak with Althea Salmon and have almost no hint of what this strong-willed fourteen-year old has spent her life battling.  Born in 1999, Althea was diagnosed during newborn screening with Sickle Cell Disease, a hereditary blood disorder effecting hemoglobin that can impact nearly every organ in the body.  It brings on a host of severe health issues including the potential for acute life threatening complications of the lungs, brain, and immune system, as well as severe anemia. Patients also suffer from recurrent and severe episodes of pain that are debilitating and require strong doses of pain medications. Already having a son diagnosed with the disease, Althea’s mother, Joan, knew that it would likely mean a life in and out of hospitals for her daughter.  For Althea, this would be the least of it.

One morning, while helping her daughter dress for school, Joan noticed that Althea was only using one hand. It had turned out that at the tender age of only four years, Althea had suffered her first stroke, impairing her hand. Joan recalls that nothing ever kept Althea down, even at such a young age, she was a strong girl with determination.

Nevertheless, suffering from strokes brought on further complications within Althea’s brain known as the Moyamoya syndrome.  In 2006 and again in 2009, Althea would need brain surgery in an effort to alleviate some of the chronic changes brought on by Moyamoya.  At this point, because Althea was a high risk candidate for continued strokes and permanent neurological damage, it was imperative to consider other avenues of support and treatment.

Althea’s mom came to find out about Dr. Cairo and a novel treatment strategy he is pursuing for Sickle Cell Disease in pediatric patients. While stem cell transplants are the only curative option for Sickle Cell Disease, most of the success in curing the disease has been limited to matched sibling stem cell transplants.  Statistically, most patients with Sickle Cell Disease do not have a matched sibling donor, therefore the need to develop effective alternative options for performing a curative stem cell transplant in these patients has been dire, especially for patients like Althea.  By using the stem cells of a parent, or a related haplo-identical blood stem cell donor, Dr. Cairo has been able to provide the hope for a cure for the vast majority of patients suffering from Sickle Cell Disease. After meeting with Dr. Cairo and weighing their options, Joan and Althea decided to move forward with the transplant.  While Althea admits that perhaps she was a little nervous and thought it might be scary, her reaction was “Let’s do it!” For Joan, there was no other real option for her daughter.

Althea would undergo both chemotherapy and radiation prior to the transplant.  Besides losing her hair, dealing with mucositis and nausea, Joan saw her daughter pushing and fighting for strength and a chance for a normal life. Joan recalls telling Althea over the years: “never let sickness get the better of you.” And certainly, Althea has not.